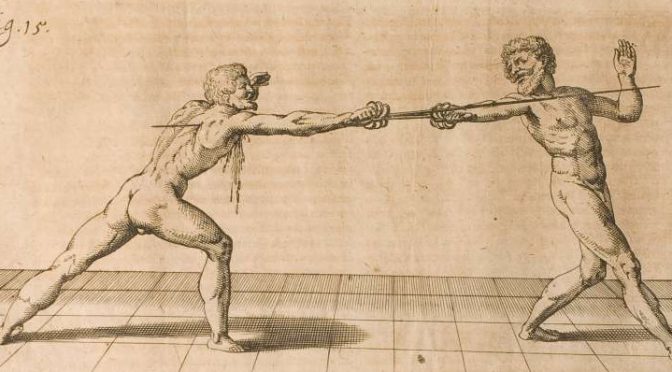 The inquartata is our first introduction to the concept of counterattacks, as well as being a characterisically Italian fencing action. The inquartata is a body voiding action, that simultaneously closes the inside line as we move our body towards the outside. When done properly it almost looks like the sword has stayed stationary in space, and we've moved our body behind it to close the inside line.

For teaching purposes, I primarily teach the more classical style of inquartata which looks like an angled reverse lunge. The inquartata demonstrated by Giganti is what I call the volta, as a way of differentiating the form.

The main reason for teaching the later classical form is that it helps the student understand the timing of the action, allowing them to build up to the full volta shown by Giganti. I've found that by starting with the classical version, students are much less likely to be counterhit (a very common problem when you get the timing wrong) when you perform the full volta style inquartata.

Inquartata as a Direct Counterattack

This is the initial teaching action, where we teach the actual sequence of the counterattack in response to the high inside gain of the sword by the opponent.

Inquartata as an Indirect Counterattack

The inquartata can also be performed as an indirect counterattack, where we invite the opponent to first gain our sword and then respond wih a cavazione and inquartata.

The indirect inquartata can also be performed with the cavazione over the opponent's sword.