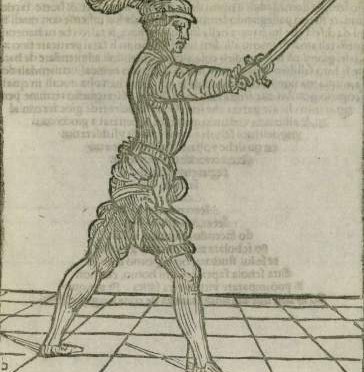 These drills are slight revisions of the Concepts from last week, using some variant footwork and handwork.

The first 2 actions we’ll be looking at are universal defensive actions that defend against most generic attacks. These are the parry with the buckler and the true edge parry using Guardia di Testa. In both cases the success of the defensive action relies on having good skeletal alignment providing a ground path for the disposition of the blow energy.

Beat the rim of the buckler up and down in response to the attack.
(Libro 1, Capitolo 4)

Feint a montante, and pass with the left foot into Guardia di Testa to parry the blow. Riposte by passing right and throwing mandritto, ending in Guardia di Testa as the left comes behind the right.
(Libro 1, Capitolo 3)