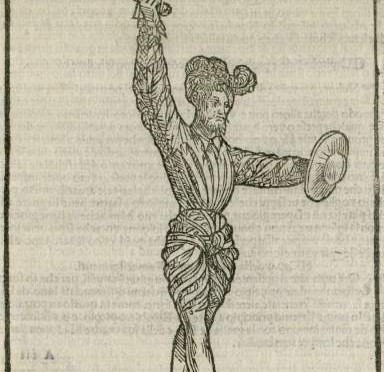 Defence Of Head Blow With Falso

Whereas the parry with the sword last week using the true edge was fairly easy, it has an integral vulnerability, that being the forefinger is exposed to the cut, especially on the earlier simple hilted swords typically used at the start of the 16th century. The parry with the false edge however protects the sword hand behind the cross and is therefore preferred by the Bolognese Swordsmanship authors.

The false edge parry is best understood not as a parry but as a counterattack to the opponent’s sword hand or face. By emphasising it as a counterattack, the student will automatically learn to close the line in the parry with an extended arm, which creates a cone of protection with the hilt and forte of the sword. Experience has shown that when students think of the action as a parry they will do so too close to the body and still get hit by the oppponent.

(From Sopra il Braccio) As your enemy passes to your left to cut riverso to your face, cut with the false edge to his right temple, defending the head with your buckler.
[Libro 1, Capitolo 10]

(From Guardia Alta ) When the enemy throws the head blow, meet his sword hand with a falso crossed over your arm. (ie Roll into Guardia d’Alicorno)
(Libro 1, Capitolo 3)